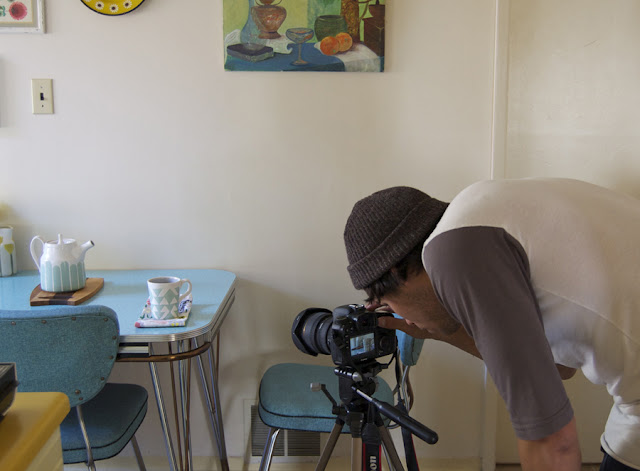 So this week has clearly gotten away on me on the 'ol blog...! I got all busy sending off my newsletter to let people know about the studio sale this weekend (please come if you are in Vancouver!!), the latest bit of press that's come my way, and some new shops that I just dropped work off.   So I didn't quite make it to finishing up my NCECA posts like I had planned this week.  That's the way it goes sometimes- there's lots to juggle around these parts and sometimes I have to let some things slide so that other things can get finished.

... Like the video that I've been working on with Evan Bourque, who worked on last year's winning skateboard video with Skate Camp.  He came by the studio early in February to shoot me making work, and it has taken 2 months to find a time to finish up the last bit of filming at home. I was able to watch an edited version of the video so far and I'm super excited to have it ready to show soon! Except for this final bit of finished work being used at my home, the studio was shot without a lot of staging- it's very non-fussy, which is what I wanted.  I think there is something seemingly glamorous or ideal about being a maker, when in actual fact, there's a lot of messy and hard work that goes into making.  So hopefully this demystifies things a little.

Along those lines I'm also a little nervous that I might be giving too much away in a video, mostly about my process.  Ceramics is a very 'sharing' kind of craft- there are always people giving workshops and tutorials about their process and methods.  I'm trusting that people who watch my process will be inspired to do their own thing rather then jumping on how I make.  Trust me, it ain't as easy as it looks ;-)!

One last reminder- if you are in Vancouver and want to come by for some super-good deals at the studio- I'll be at 975 (up-stairs) Vernon Drive along with the lovely Claire Madill from heyday designs.  There are a few more peeps down the hall with some more lovely hand-made goodness!  Please stop by and say hello!
Posted by dahlhaus at 11:24 PM