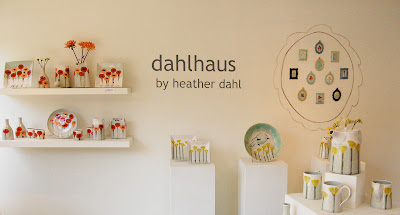 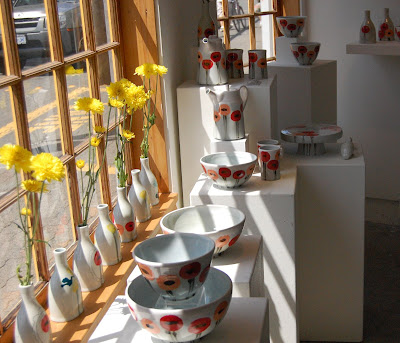 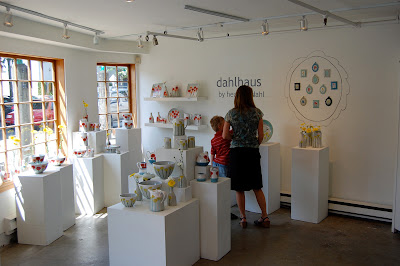 So here it is, my solo show at the Gallery of BC Ceramics, on Granville Island!
A little bit about the background to the show: A show is often dictated to artists in terms of the space and the gallery's expectation for the artist. The premise for this show was more or less given to me when I was asked to exhibit. Since I am fairly new at the gallery, they wanted me to showcase the work I've already been making, not to attempt to come up with entirely new work, but to make the work that I usually make, just more of it. So, I titled the show after the collection of work, which is 'dahlhaus'.
The amount of work I needed to produce and the sales expectations of the gallery certainly made me consider what and how much of my work to produce for the show. Knowing that my mugs sell really well at the gallery meant that I was making a lot of mugs for the show, but I did manage to pull together some special work for the show. The large plates and platters are more one-of-a kind pieces, and little tile frames were new to the show (although you may remember I did a little proto-typing with those tiles this past spring). I was losing sleep over some of my installation ideas, as I wanted to try something a little different to display the tiles, so you'll notice that I drew, with water soluble graphite, the same little frame that I often draw onto my bottle vases, right onto the wall in the gallery to 'frame in the frames'. I was pretty pleased with how it turned out, although I'm already back in the studio this week to glaze some more frames so the space will always be filled up (I only had 4 extra tile frames...).
So there you have it, Dean did a little videoing of the show, which I'll put up at some point when I get to it, but we just have to edit out some of the scenes with my boys goofing off in front of the camera:).
Posted by dahlhaus at 9:55 PM

Labels: Solo show at the Gallery of BC Ceramics

Wow, it looks fantastic! I'm so excited for you! I'm hoping that we can pop in there this weekend to take a look. I'll be seeing you on Thursday either way!