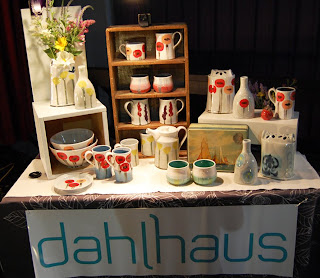 Well I didn't want to be cheesy and ask for a photo op with Faythe Levine so here's a picture of my table for the craft showcase part of Handmade Nation coming to town! It was a really great evening, with the theatre nearly full, the people from all over the greater Vancouver area and even into Seattle! The people behind Got Craft put the event on, which included the craft showcase, a photo-booth, some sweet swag bags (by the look of it) and the much anticipated FILM!
I really thought the film was great on many different levels. I appreciated following a crafter throughout the film as she heads out and sets up her wares at a Craft fair. I thought the story line on her, in-between interviews of other crafters, artisans, store owners, and then the more academic crowd talking about the movement surrounding craft and diy, tied the whole film together. I appreciated how authentic the people were, it was them in their studios and homes, being real about how they got started and what they do and why. It was empowering to see all those women and oftentimes their families, using their hands to reinvent craft. Certainly there were some real characters and excentricities that were fascinating to watch!
Thank you to those of you who came by and checked out my work- the lovely comments were great! Again, it was great to chat with Faythe Levine over my work! She even bought a vase for a wedding gift, so that was kind of cool! Also one of my big highlights was meeting Jan from Poppytalk! I think I am convinced more than ever that the 'industry' of craft is much broader than just the maker. There are so many levels to that maker being able to sustain their craft professionally, and people who promote, educate, and enlighten the general public on craft play such a significant role in enabling the maker to keep at it!
Posted by dahlhaus at 8:54 AM

Heather, I so enjoyed meeting you! And I loved that Faythe bought a vase from you after I bought a bowl. My car was packed with awesome goodies. :)