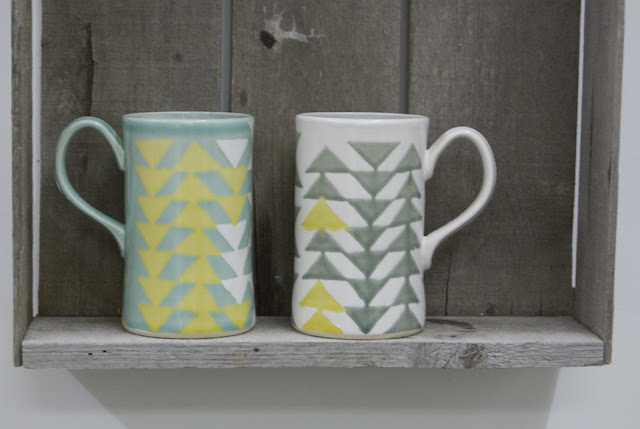 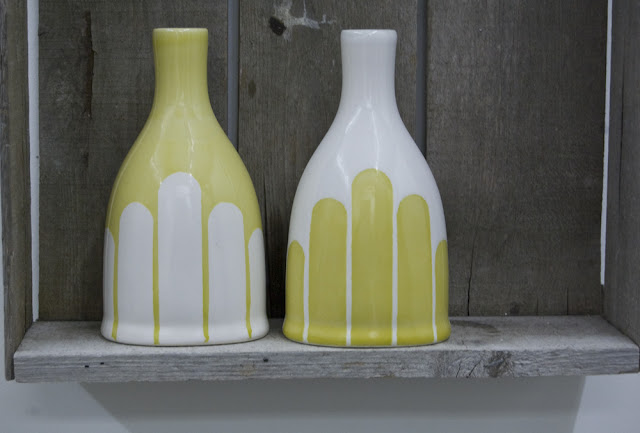 I pulled out my first kiln-load and quickly shot these photos on a dark day in the studio, but here's a sample of the work I had been glazing last week.  The tall striped vases didn't make it into this kiln firing, save one, but I've got some new work coming out of the kiln later this week and then more by Saturday of the Eastside Culture Crawl.  It's a bit of a scramble this year to feel like I'm going to have enough work for my 2 shows.  The emails of special orders and reserving work have started and I've already sold out of the short striped mugs I had made for this weekend.

I had been really excited about trying different glazes as the 'backdrop' of my pots but I'm not as keen on it as I thought.  There are some things I like about it- I like the way the yellow and turquoise triangles play with each other, and thought it was a no-brainer to include a few little white triangles in the mix, but really regretted it when I pulled it out of the kiln.  On the other hand, the white mug with the greeny/grey triangles with hits of yellow, feels much more successful although I think it could be fun to play around with the colours.  Some of the edges between the glazes got a bit fuzzy and not so straight, partly due to the glazes I used.  I'm also not quite convinced about the reverse bottle vases.  I have now tried the turquoise, saffron and grey (which was a complete flop).  Maybe next time I'll try to pair glaze colours together...
Posted by dahlhaus at 7:32 AM

I actually really like the white triangles mixed in there!