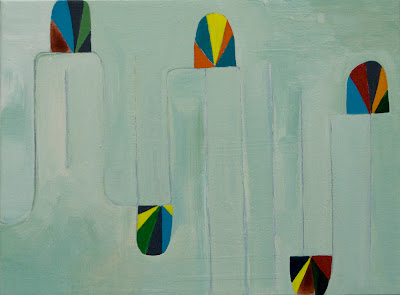 Wow.  March already.  For some reason the shortness of February always seems to take me by surprise, and the month is over when it felt as though it just began.
Here's a little glimpse of one of the newer smaller abstract paintings that I worked on in January.  Sometimes it's hard to see connections between my architectural paintings and my ceramics.  This summer I had started on some small paintings with ideas that I then left it until January to work on again.  Something about the act of paintings re-surfaces in my clay work and vice-versa.  I find both practices integral to the way I work, and while the ideas out of paintings that come into my ceramics (or the other way around) can tend to take some time to be worked out, more often then not, the ideas are much more realized when they do.  I'm so much more inspired by the act of translating an idea, a shape, or colours in both mediums, even if one of the mediums doesn't turn out to be as successful as the other.

On a totally different subject, I was pleasantly surprised to see one of my old ceramics instructor Joan Bruneau has a post on the Ceramic Arts Daily Blog, all about throwing/cutting & pasting.  I saw Joan last year at the Clay Symposium here in Vancouver where she re-inspired me to consider creating 'dynamic forms', and to re-consider form by creating little sketches or small pots to rework, cut and paste as possible examples for creating larger and more interesting forms.  Both posts are worth the read!
Posted by dahlhaus at 8:03 AM