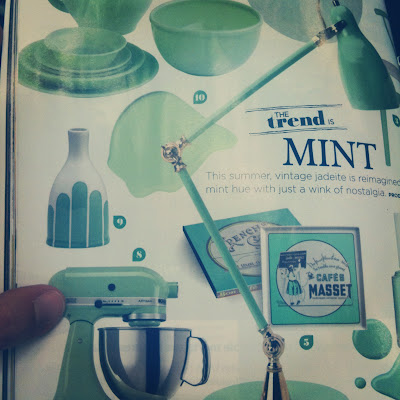 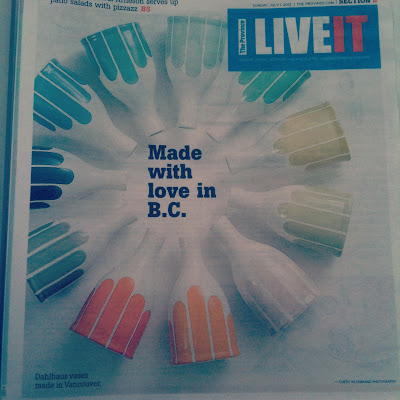 I kind of fell off the blogging wagon last week (more on this to come) but wanted to start off the week with some photos of recent press!  My Striped Bottle Vases (which are sooo last season ;);), nudge, nudge) keep getting press requests, and what can I say, but that I am happy to oblige.  So here they are in the August issue of Style at Home along with the minty (albeit kind of turquoise to me) trend, and also in The Vancouver Province July 1st newspaper (you can read the article here).

I have to admit that I've been pretty up-front with people (including the reporter from the Province article) trying to dispel the myth that because I have work featured in a magazine or sold through Anthropologie, that I'm not rolling in money, like some may presume.  Perhaps I've been a little too honest about this, however I think it's really important to understand that people who are making handmade for a living probably have chosen this career because they love and are passionate about what they do, not because it's the most viable and lucrative business plan out there (because it's generally not!).  Making from scratch takes time, money, energy, patience, and even some hard-earned talent.

Sometimes I think the Etsy 'quit your day job' series creates the aura that anyone anywhere can quit their day job, stop working for 'the man' and create a hand-made business that can become an overnight success!  There might be Etsy shops out there that have been able to do this but probably at the cost of some integrity along the way.  I think it's important to consider how to build a long-term, viable career as an artist.  This kind of a career starts out really slow and evolves and grows really naturally as work and ideas are being developed.  In the end, this takes a lot of time and effort, which I trade for the satisfaction of knowing I did my best to create something beautiful and functional that can be used and enjoyed.
Posted by dahlhaus at 10:17 PM