Turn Up (the art) 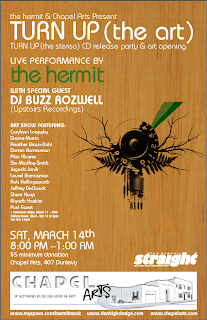 I'm always excited to get involved in shows when there are some really great people involved! This show coming up in March is just one of those! The Hermit drummer and song-writer, Hamish, lives down the street from us. We started getting to know his family a couple of years ago on our evening walks and bike rides as their oldest son is the same age as ours. Hamish recently quit his day-job to do music full-time and he is loving it. This CD release party and art show has been something he's planned for a little while now and I'm really excited to be involved. It's at the Chapel Arts another great venue in the city- an old funeral parlour that has been converted into an Art and Music Venue! I've been in a group show there before with the Eastside Culture Crawl so I'm looking forward to being back with a new bunch of artists- my good friend Sherri Koop included!
Art show will be March 8-29th, opening night CD release party will be March 14 8pm-1am. You can check out the Hermit's music on their myspace page.
 
Posted by dahlhaus at 7:41 AM

I'm pumped for this Heather and so happy that you are involved!