Some Newbies out of the Kiln! 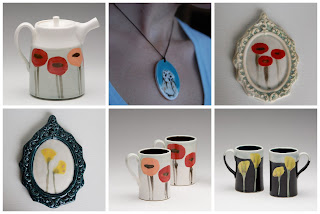 My first firing of the new year wasn't a complete disaster. As you may have read from previous posts, I am a part of a clay co-operative at the Mergatroid Building . One of the perks about this studio is that I haven't yet had to buy a kiln. We all share 2 kilns that the land-lord bought for the co-op. So one is a smaller, but very reliable Skutt computer kiln- ie you plug in your firing schedule, and walk away, come back and everything is as it should be when you open it the next day. It fires off evenly and quickly. The other is an old Gare kiln with a pernikity computer that seems to have a mind of it's own. I've only been using this kiln for bisques lately because I didn't want to risk a huge kiln load of work to the kiln gods, so to speak. It is larger- basically fitting in twice as much as the other kiln.
So, this year, with 3 new people adding to the roster of firings, the small kiln is in much demand. I am determined to figure out this big kiln and thought that January would be a good month to risk it. So, risk it I did. I loaded it full of 3 orders that I had, plus extra work I needed to get out for my own stuff and turned it on. Probably should have come back around 1 am to see what the temp was, but my life is just not made for that kind of committment. It took over a day to cool down and it was fired quite a bit hotter than it should have. Thank goodness my clay and glazes can, for the most part, withstand it. There were definately some droopy, fuzzy poppies among the bunch. A few of my bottle vases didn't make the cut, and 1 large bowl had a teeny, tiny blister on the inside that is quite annoying.
However, I do think I have the kiln slightly figured out. My settings will be much lower than the cone I'm firing to next time, and I am making a mental not as to where I load stuff as the bottom is way cooler than the top.
So lessons learned, not a complete disaster, and thank goodness everything for my orders turned out well!
Posted by dahlhaus at 10:40 AM