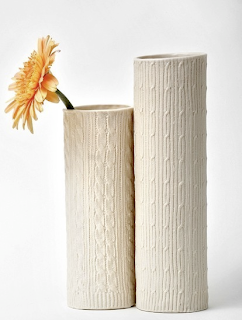 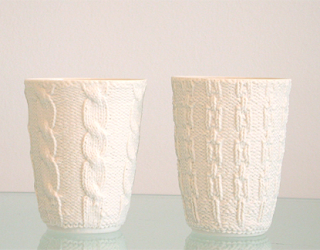 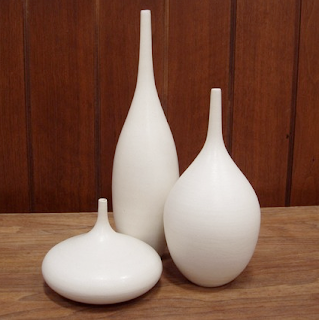 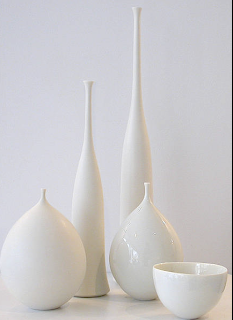 This morning as I rushed through my usual computer stuff, checking emails etc. I happened upon a website of European Craft artists called Craft2Eu and was immediately struck with what I saw! London ceramic artist Sophie Cook's (image #4 at bottom) gorgeous bottle forms that very closely resemble an american ceramic artist Sara Paloma's (image #3) bottle forms, which I have so often admired. Then scrolling down to another artist I also noticed UK's Annette Buganski's knit inspired cups which really look a lot like american ceramic artist Alyssa Ettinger's knitware line of work (image #1). My studio-mate Lise Kuhr found her ceramic twin last year when she opened a Ceramics Review and saw a very close copy of her ring platters made by a Korean artists. Hmmm...
It happens. People do come up with similar ideas. Perhaps it just means this work is really that great- so great that more than one person is making it. Perhaps the internet is just making us more aware of how small a world we do live in and how trends do effect what we make and how we do it. I don't want to jump to the conclusion that one person was inspired directly by the other here since the work is all really simple, lovely and extremely well done. However, I kind of feel like it is somewhat of a shame that they might be making really similar work as it could seem like someone was being a 'copy cat'.
Recently a new studio-mate moved into the studio and she makes jewelry that happens to be really similar to the jewelry I make. I have to be honest and say that I don't really feel like making my jewelry anymore. It no longer interests me the way it did when I thought I was the only one making it the way I was making it. There is something psychological that drives someone to keep at what they are doing when they are under the impression they have something new to offer. When you can no longer 'own' what you do in some way, you feel as though it isn't worth making any longer. Which can also be a good thing, pushing you as an artist to making new things and striving for new creative goals.
Anyways, it was food for thought. If the fashion industry can have multiple designers making the same clothes, surely this world is big enough for some kissing cousin in the ceramic realm. I'm on the look-out for my ceramic twin- if anyone finds one, let me know. (And yes, I have seen some poppies on clay out there, that doesn't quite count...)
Posted by dahlhaus at 9:14 PM