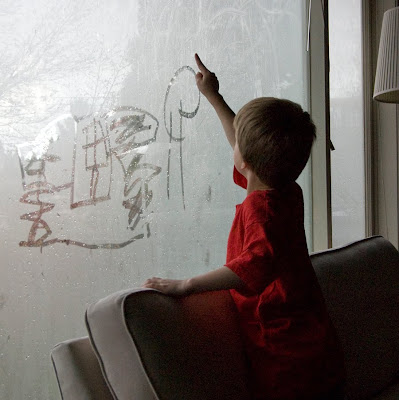 ...when things don't go as planned.
That was last week.  There have been some strange things going on with our kilns/breaker system and it's been causing some stress at the studio.  The new kiln was supposed to help out with the demand for kiln time, unfortunately, the coils weren't the right ones for the wiring in our building.  On Saturday we had a meeting about the kiln room- moving the breaker so the switch doesn't turn off mid-firing/getting the coils fixed, etc, and hopefully it will be resolved this week.  In the meantime, I won't be able to ship out a large wholesale order that I had planned on this past week.  Bummer...
Today it was a home day with sniffly boys and me feeling tired after a weekend show.  I've been at the studio really late some nights trying to get it all done.  I'll put our boys to bed then head out for a late shift at the studio (1-2am) and still get up at 8 am to get them ready for school, then head back to the studio while Sasha is at Kindergarten, then back home to pick up/play with/make supper/tend to family.  There's been a lot of juggling going on just to get the work done, so it was disappointing to try to fire on 3 separate occasions with 2 different kilns and still not have the work finished.
With all the crazy time I've been putting in lately I decided I might need some studio help sooner than later, especially over the summer as the kids are out of school.  I put the word out there hoping that an  Emily Carr student might want a bit of a mentorship/studio job 1-2 days a week. And it has been great to have a response from a couple of people. I have a really great feeling about one person in particular and am kind of excited about having 2 extra hands around the studio, along with passing along some of my own knowledge, experience and skills to someone I have a good feeling about.  Hopefully it's the start of something really good for me and for her too.
Posted by dahlhaus at 9:23 PM

Labels: at home, just me, life, the family, the studio