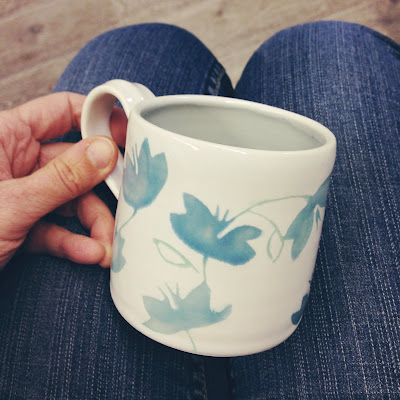 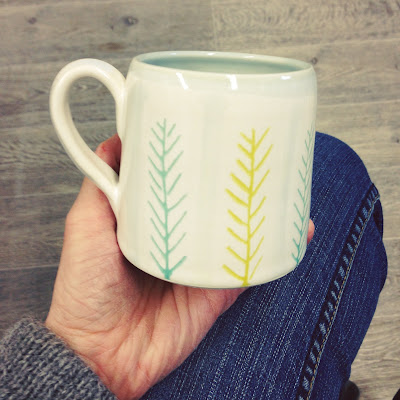 Wow! I so appreciated the comments from yesterday's post giving feed-back on some of my new work!  I was recently reading this blog post about 'what's up with blogs' and feedback being so much quicker to receive on facebook or instagram, where as the process for blogs is taking a lot of time these days (passwords/security codes etc).  I did think about whether I had been commenting as much on blogs as I used to - probably no, I might like something or want to say how much a post connected with me, but don't always have the proper time to spend.  So when I get more then 2 comments here, it feels like a big deal- so thank you! It means a lot!

While we are on the new work front, I posted a couple of photos on instagram from my first firing of the year.  I thought I would try a glaze inlay method- which is kind of like a mishima method but using glaze instead of on the bare clay.  I was pretty happy with the results as one-offs, especially the first mug, which kind of has a water-colour/japanese floral design look to it.  At least that's what I thought when I saw it.  The first mug combines my sticker/stencils with then the glaze inlay lines for the stems and leaves. The second is just the glaze inlay idea with a super simple pattern.  If you want to try this method yourself, basically you glaze your piece and then apply a wax resist and let that dry a bit.  Using a sharp tool you draw/carve into the glaze and then sponge off the extra wax/glaze from inside the lines.  At that point you would fill in the lines with a different glaze.   Obviously this method probably works best for simple drawings- not super detailed drawings, but it's worth testing out.  I think the biggest drawback to this method would be that there is no going back, only going forward.  In other words if you make a mistake- I guess you could try to fill the line with the original glaze and hope it covers it up?  Something to think about.

On another front, the Canadian Clay Symposium is coming up (as well as NCECA).  I generally really like going to workshops and conferences on ceramics as they can be inspiring.  My biggest complaint that I walk away with, however, is that all too often, the presenters spend most of their time just talking about how they construct their pieces and not enough time talking about decoration.   I realize that the time crunch of presenting work and limited materials often means that presenters aren't glazing their work during the demo, but that is what I would like to see in a demo.

Tomorrow I am going to this event.  I'm curious to see what it's about.  Sometimes it's nice to connect with new people and to try new things, don't you think?  You never know where it will lead!
Posted by dahlhaus at 9:06 AM

These mugs are lovely. Hope you had fun at your outing!

I'd like to invite you to visit my blog at goatseathay.blogspot.com